“Consequences of the Badge” relates firsthand battles to let everyone, including public safety officers, know that it’s okay to seek help. 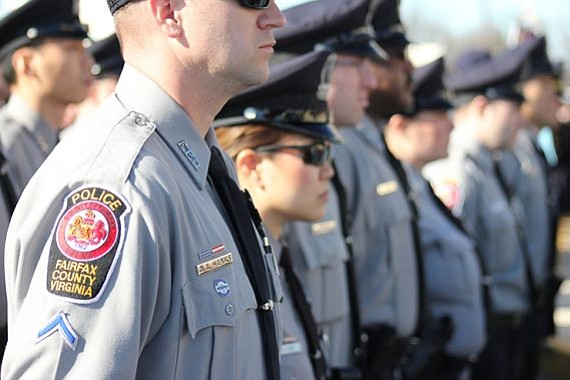 First responders are shown telling their stories in “Consequences of the Badge.” 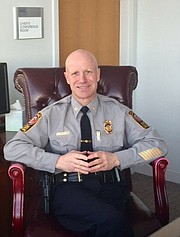 It takes courage to speak out.

The unborn baby was dead after 12 weeks of pregnancy.

The frantic call came on a Friday.

She had ended her life in the garage of their home.

Her husband began drinking whiskey as the “battle between demons” waged in his head.

One afternoon, he stopped in a church parking lot and lifted a handgun to his head. They had two small daughters.

He put the gun down. “I don’t know what stopped me.”

What makes this suicide story unique is that the husband is a Fairfax Police Officer and so was his wife — the mother who tragically ended her life.

The officer is one of several who tell their individual stories in an extraordinary video entitled “Consequences of the Badge” that Fairfax Police Chief Colonel Edwin C. Roessler Jr. is currently showing during roll calls throughout Fairfax County.

(In the video, all of the officers identify themselves and explain that they are neither ashamed nor embarrassed to share their emotional stories with their fellow officers. I have not interviewed them personally or asked for permission to write about them, so I am not using their names.)

After the 2015 suicide of the distraught mother/police officer mentioned above, Chief Roessler felt compelled to act. He had to do something to help his officers deal with this preventable tragedy. During his career he has known of at least 16 active and retired Fairfax County police officers who ended their own lives.

Chief Roessler began by talking openly to his officers about his own struggles dealing with the horrors of death of both community members and police officers during his decades of service. Those incidents led him years ago to seek help from a therapist from the department’s Incident Support Services program – which he helped create in 2006 – to treat his own PTSD.

Over lunch at Bagel Buddies in Fair Lakes Shopping Center, Chief Roessler told me there should be no shame in talking openly about depression, PTSD and other mental illnesses. It is not a mark of weakness. Instead, admitting you need help requires courage and strength.

“Suicides in law enforcement are a ‘silent epidemic.’”

Still, speaking out is difficult.

In Chief Roessler’s video, a veteran Arlington Police officer explains that if he were sitting in the back of a precinct room watching a teary-eyed patrolman recounting how he had nearly killed himself, he would have scoffed.

That was before he became that officer.

“It should be okay to not be okay,” Roessler told me, explaining that he wants Fairfax officers to know that they do not need to worry about damaging their careers or losing their jobs in Fairfax if they need counseling, attend therapy and/or take medication. This is not true in other police departments, he added. That is why the Fairfax video is not the only step in Roessler’s campaign to keep his officers and others safe. He plans to talk at an upcoming national law enforcement meeting about officer suicides.

Initially, the Arlington officer in the video sought help when he became deeply depressed.

He saw a therapist and took medicine, but stopped both when he felt better.

“I treated depression like a cold rather than a long term illness,” he said.

When the officer became despondent, he locked himself in his home’s bathroom with a pistol. Gazing into the mirror, he imagined himself raising the gun – an image so real that he believed he could feel the gun’s barrel pressing against his temple. He saw himself pulling the trigger. Luckily, his wife broke through the locked door and got his best friend to go with them to a hospital. He was reluctant to be admitted until he wasn’t given a choice because of how sick he was. Still, he was afraid Arlington officials would fire him. Instead, everyone from the police chief down was supportive. He’s still on the force.

The Fairfax officer says his wife, who ended her life, was strong and determined. Those qualities and stigma caused her to not seek help. The loss of their baby sent her into a “deep chasm.” She believed the only way out was “to jump through a window, ignoring the door next to her.”

She was his soul mate and he felt half of him had died. Eight months later, in that church parking lot, he pressed a gun against his temple. It was a turning point that fortunately ended with him lowering his weapon.

Going through fire, he said, either makes you stronger or you melt. He came out stronger.

In 2016, a Virginia Highway Trooper learned his wife had failed to show up at work.

She was a Fairfax County firefighter. His entire world stopped. A missing persons report was issued. He’d seen plenty of them but this one was about his wife. They found a suicide note in her abandoned car. He kept thinking about the Tuesday night before she had disappeared. She’d not said a word. Nothing. No hints, no clues. A short while later, they found her body.

He refuses to say that she “committed suicide” because that implies it was the choice of a rational mind. The illness had taken control.

The day after her funeral, he awoke from a drunken stupor in the bathroom of his home with his handgun on the floor next to him. He had wanted to end his life so he could be with her. He began thinking about how devastating her death had been to him. How it would impact others. The illness hadn’t captured his mind. He sought help.

A Fairfax firefighter didn’t think anything was wrong with him when he joined the department after doing 20 years in the military.

That was before something triggered flashbacks. A special ops mission. He was one of four Americans sent to find a cache of arms. A “soft raid” that turned into an ambush. He shot an enemy combatant point blank in the face. He saw him die. He was certain he was going to die that night. Somehow, he survived – physically.

His PTSD didn’t surface until much later. His wife, a Fairfax police officer, knew when he switched off his phone one day that he was suicidal. Eighteen hours later, he turned it back on and agreed to seek help.

Only a few days before I had lunch with Chief Roessler, his officers had been called to investigate a murder-suicide in Herndon. A mother apparently had killed her two small children before ending her own life. Seeing such carnage takes a toll, the chief said. You can’t just keep stuffing such traumatic scenes into the back of your mind. Officers are human. They suffer the same as everyone else.

For several decades the Fairfax Police Department helped officers through its peer support program but on May 8, 2006, the department’s leadership realized more was needed. Two Fairfax County Officers, Detective Vicky Armel and Officer Mike “Gabby” Garbarino, were ambushed outside the Sully District Station and both died from their wounds.

On that day, Roessler was the commander of the Department’s Administrative Support Bureau responsible for all casualty assistance programs, including its peer support unit. He and his team realized they were overwhelmed because of the trauma inflicted upon officers, the survivor families, county employees, and the community. Roessler and his team reached out to the Federal Bureau of Investigation’s Behavioral Science Unit at Quantico and the county’s Risk Manager for advice and quickly formed an Incident Support Services (ISS) unit led by two full-time police psychologists and many support personnel. The ISS unit has been so beneficial that it has become a model for other public safety agencies across the nation and it continues to pursue Roessler’s vision to rid the stigma of mental illness in the public safety profession.

The chief didn’t stop there.

He recently was appointed to the board of directors of the Badge of Life, a not for profit foundation created to educate and train law enforcement officers about mental health and suicide prevention. In his sixth year as chief of police, Roessler said he wants to ensure that all of his employees are not afraid to seek help to maintain their mental wellness at all times.

Roessler said he knows firsthand how the cumulative exposure to tragedies coupled with all of life’s challenges require “ensuring you treat your brain as a muscle and work it out often with a therapist.” He added that he and his staff are working to change policies and procedures across the Commonwealth of Virginia to treat PTSD as a presumptive injury in order to treat officers and get them well.

“This has become my calling in life and I have assembled a great team of professionals who are committed to create change in mental wellness practices and policies in the public safety profession,” he told me. “The facts are clear that suicide death rates exceed line of duty deaths across the nation.”

And those are only the suicides that get reported. Some public safety agencies don’t track suicides out of fear of the stigma, possibly eroding benefits to survivors, and exposing the lack of care given to their employees.

“Consequences of the Badge” is difficult to watch, but Roessler has watched it more than a dozen times. The first responders shown telling their stories are heroes, he told me.