‘This Will Be One of Fairfax County’s Gems’
Votes

‘This Will Be One of Fairfax County’s Gems’ 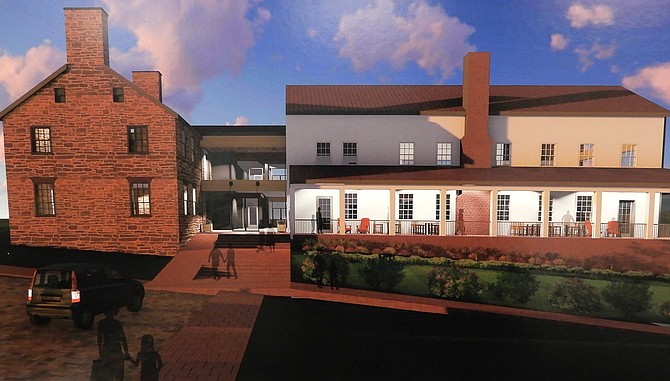 Artist’s rendition of the Bull Run Farm Brewery in Centreville. A glass atrium is between the two buildings.

The Winery at Bull Run has proved so successful that owner Jon Hickox now wants to operate a farm brewery. His property is adjacent to Manassas National Battlefield Park, off Route 29 in Centreville.

He wants to build two, historic-looking and adjoining buildings meshing with the landscape. But his plan requires the county’s blessing to amend the current special permit for the existing horse stables on that site. The stables will remain, but the brewery would slightly encroach on the pasture, so the new use also needs a special-exception permit.

On July 15, Hickox made his second appearance before a joint meeting of the West Fairfax County Citizens Association (WFCCA) Land-Use Committee and the Sully District Council of Citizens Associations. His first visit was smooth sailing; but this time, his Stonebridge Chase neighbors turned out en masse to have their say.

Although they generally don’t object to the brewery, most are furious about the access road leading to it and the potentially large volume of traffic the facility will place onto Bull Run Post Office Road. They also worry how the access road will affect their neighborhood, and several say they didn’t even know about that road when they purchased their homes.

“We were the first homeowners there, and we weren’t told about the road,” said Dawn Battle. “Hickox is a developer and a business owner; he hired the builder and is our HOA [homeowners association] president. He has a fiduciary responsibility to us, and he didn’t tell us about the road. Last November, he only showed us a piece of the project – and we do not support the use of the road for the brewery.”

AT THE MEETING’S OUTSET, Hickox presented his case. “This application is over five years in the making and will help protect 171,000 acres of land from development in a responsible and sustainable way,” he said. “We envision an authentic, farm brewery with beer using our own, homegrown hops, while not harming the beautiful, mountain vistas.”

He said his proposal has been “thoroughly vetted,” and Fairfax County staff, VDOT and the county Department of Transportation all support it. “Opponents want us to build a new access road,” said Hickox. “But constructing a new highway through the winery property would entail the National Park Service taking land from the Battlefield – to which they’ve given a resounding ‘No.’”

Hickox further noted that, when the county approved the special permit for equestrian use in 2016, it also memorialized the future, proposed use of the road as the entrance to both the boarding stables and a brewery. That same year, ground was broken for Stonebridge Chase. By 2018, he presented plans for the brewery to the new homeowners.

He said it would be a less-intense land use than the 12 homes that could be built there by right. And he stressed that, by build-out, 33 of the 40 acres within the brewery application – or more than 82 percent – would be kept as open green space. And, said Hickox, “That’s important to the preservation of the Occoquan Watershed.”

He said just two wells would be drilled for the brewery and horse farm, compared to 12 if homes were built instead. And all the beer-making waste would be hauled offsite so it wouldn’t adversely affect the watershed or the community’s drinking water. Some 80 percent of the beer would be made in an offsite, industrial area, with just some smaller-batch, specialty beers made onsite. Overall, said Hickox, the brewery would use far less water annually than would a single-family home.

“I care about preservation of the land and water,” he said. “Our farm has frontage on Bull Run Creek, and we provide a 90-acre conservation easement buffering that creek and the source of Fairfax County’s drinking water.”

Hickox also said the proposed brewery was disclosed within Stonebridge Chase’s HOA documents and the covenants of each homeowner’s deed. And he noted that, in its seven years, the Winery has had no problems related to traffic, drunken car crashes or the environment.

“I truly believe this will be one of Fairfax County’s gems,” he said. “I seek only to create another interesting and unique place that can be enjoyed by everyone.”

WFCCA’s Ted Troscianecki asked about restrictions on winery events. Hickox said weddings are during evenings, and corporate events/retreats are on off-peak hours during the week. “Eighty percent of our business is Friday-Saturday, and we’re allowed 24 special events/year,” he added. “Normal activities are tastings and tours, and the brewery would do half the business on twice the acreage.”

WFCCA’s Chris Terpak-Malm asked why the brewery buildings were so close to the homes, and Hickox said they wouldn’t face the houses. “They’re in the center of the property and can’t be moved any closer to the floodplain,” he explained. “And noise will be projected away from the homes.”

THE SEVERAL RESIDENTS weighed in on the proposal. Afterward, Troscianecki moved for denial until the access issue is resolved. “There’s way too much controversy over access from Bull Run Post Office, which isn’t an arterial road,” he said. “We’ve got to look at access from Route 29.”

Agreeing, Terpak-Malm said, “I was set to approve this before hearing the residents’ comments. But we need to step back and reevaluate the access.” However, WFCCA Land-Use Chairman John Litzenberger said the county told Hickox to put the access there. Noting that traffic is less intense on that road now than it was 10 years ago, he voted for approval. Ultimately, though, the WFCCA voted 4-1 to oppose.

The Sully District Council approved a motion not objecting to the brewery but worried about its access. Jay Johnston said Bull Run Post Office Road is too narrow. “I’m appalled at the failure of VDOT and FCDOT to properly assess the access considerations,” added Lewis Grimm. “This is much preferred to [by-right] houses there, but we have concerns about safety and access.”