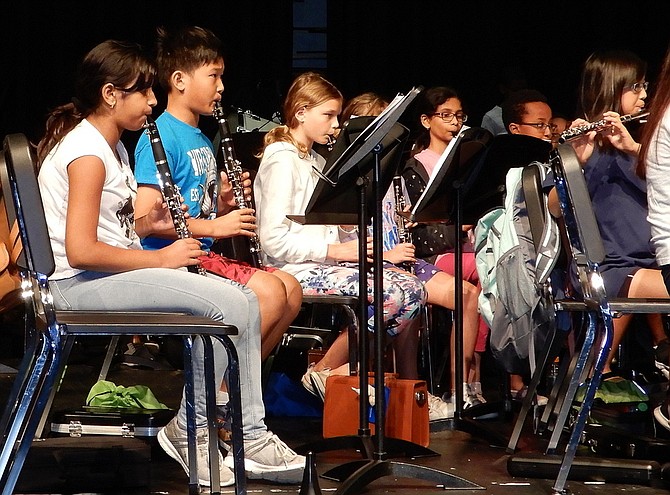 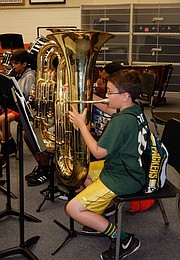 Playing the tuba at the Band and Orchestra Camp. 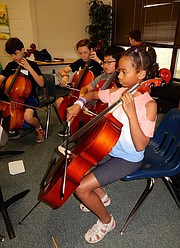 These Concert Band members intently concentrate on the music.

The venue this year was Centreville High, but the event was still the 34th annual Franklin Middle School Band and Orchestra Camp. And as always, it was a smashing success.

The camp ran June 17-July 10, and 400 fourth- through rising 10th-graders attended. On the first day, students auditioned for placement in various levels of band and orchestra, such as beginning, intermediate and advanced. They then received both individual and group instruction.

“Things went smoothly because the teachers and students who came to it know how it works – the philosophy, purpose and final outcome,” said Walker. “I have a passion for education, music and for people learning music, and it’s always nice to tap into hidden talents. We also have several, high-school students interested in becoming college music majors, so they assist the teachers.”

For four hours each day, band students had two rehearsals, one sectional class – such as woodwinds, brass, percussion or strings – and one instrument class.

“For elementary-school students, one day of camp is equivalent to a month of music in school,” said Walker. “For middle-school kids, their time here is equal to what they’d get in a year of music classes at school.”

Sectional classes worked on the music their band or orchestra director was teaching. And instrument classes focused on fundamentals such as scales and tone quality and were like master classes or large-group, private lessons. The teachers were FCPS, Prince William and Loudoun County band and orchestra directors, private music teachers and retired military band members.

Centreville High sophomore Oliver Sciulli has played cello for six years and attended camp for the first time. “I wanted to get better for the next school year in the orchestra,” he said. “I learned more-advanced techniques, like harder shifts between chords. The teachers were good and were also really nice, and the camp was helpful because I learned valuable information and techniques.”

Another new camper was Navy Elementary sixth-grader Samanvi Tummala, who’s played viola two years. She chose it because “It’s easier to play than a violin.” And she came to camp because “My friend said it was a great learning experience, so I thought I’d try it.”

And, said Samanvi, “It was really fun. The teachers are nice, and it’s enjoyable because you get a lot of time to practice each day. I learned how to tune my instrument, blur my notes properly and play faster.”

Centreville High sophomore Sahar Zeiaei has played violin for six years and attended camp to improve her skills. “I got exposed to different rhythms and new, note patterns,” she said. She liked playing in the highest-level orchestra, as well as “working with new kids, because it helps to know what everybody’s strengths are, and it was nice being with different age groups. This camp is very rewarding. You improve so much over this short, three-week period because you’re playing for such long hours, and you meet new people and have fun.”

Centreville classmate Katherine Reyes, a six-year viola player, chose her instrument because her brother used to play it. “I like how it’s like a mini cello – and is easier to play than a cello – but it still has a deep sound,” she said. “I came to camp because I wanted to challenge myself over the summer.”

Furthermore, said Reyes, “I never attended a music camp before where I got one-on-one instruction, like a private lesson. It’s been very helpful, and I know people here, so that makes it more fun for me. The teachers taught me a lot about playing properly, and I could practice more what I love to play.”

Molly Sgrecci, Stone Middle’s orchestra director, taught music theory. “Students learn how to read and more thoroughly understand music notation,” she said. “We discussed the basics and the different kinds of notes and clefs for each instrument. Then we talked about how to write music and time signatures.”

In her second year of teaching at the camp, she said, “Taking 2½ months off from your instrument during the summer can be detrimental to what you’ve learned during the school year. So here, students continue to learn more about their instruments and their specifics.”

Besides that, added Sgrecci, “We’re preparing them for, perhaps, a more difficult level of band or orchestra in the fall. And as a teacher, it’s nice to work with colleagues we wouldn’t get to during the school year. During the regular year, we have time constraints, certain things we have to teach, plus administrative work. But here, we can just teach the music – which is the fun part – so that takes the pressure off and makes it enjoyable.”

Melissa Hall’s son, Centre Ridge fifth-grader Jordan Hall, has played tuba two years and was at camp for his second time. “You meet a lot of new friends and have fun,” he said. He likes the tuba because “It’s a really low sound and it’s not insanely difficult to play, with lots of buttons.”

He learned how to play more-advanced songs and enjoyed playing at a harder level. “The camp’s fun, and you get to learn at your own pace,” said Jordan. “And I liked having my mom as my Cadet Band teacher here.”

Daniel Pak, in sixth grade at Colin Powell Elementary, has played saxophone one year. “It sounds nice and looks pretty cool,” he said. “I like the fun songs we played at camp. I came here to get better for my school band. My favorite part was when all the bands came together and played. I learned about different scales, and I’d recommend this camp to others because you learn more about your instrument and the music.”

Brian Robinson, music teacher at Hunters Woods Elementary, taught at the camp for his fourth year. “Beginning students make as much progress in 3½ weeks of camp as they would in a whole year of school, because they only have band once a week,” he said. “And since I teach general music, I don’t get to conduct in my daily, teaching life like I do here.”

Franklin Middle seventh-grader Paul Lewis has played drums two years. “They’re different from other instruments,” he explained. “Instead of playing notes, I wanted to play marimba, bells, crash cymbals, and crash and snare drums. I came to camp to learn more and be ahead of the other music students at Franklin.”

He especially liked the sectionals and techniques classes “because they’re like rehearsals where everyone works together. And the teacher is teaching us specifically, not all the instruments at once. At camp, you can become a better musician.”

ALSO A DRUMMER, Centreville freshman Ryan Hendrickson is excited that he’ll be on the Wildcat drumline. However, he said, “I’ve only been playing four months, so I wanted to catch up on drums and learn to play the rudiments and skills of the other percussion instruments.”

Calling camp “a bunch of fun,” Hendrickson said, “You get to make cool sounds with the snare drum and other instruments. I learned scales for bells, rudiments for drums and how to use sleigh bells. It’s helpful if you missed things in band class and helps you improve your skill level. I’d definitely recommend it to others.”