It’s slated to be built on Willard Road. 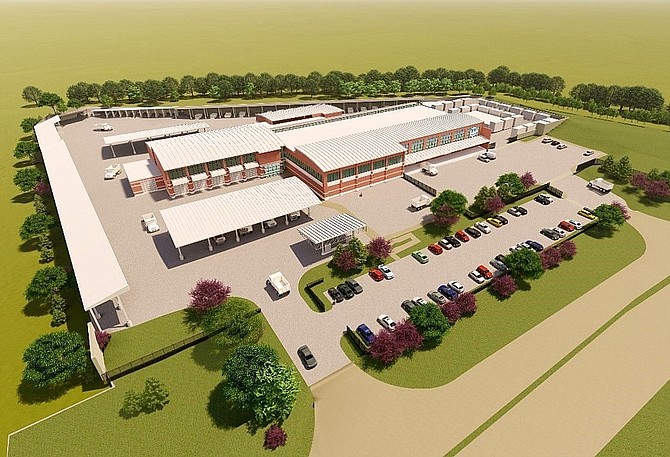 The site layout of the new water-maintenance facility in Chantilly.

Fairfax Water wants to build a new water-maintenance facility at 14925 Willard Road in Chantilly. It would replace the existing one in the Sullyfield Business Park.

On Sept. 18, the Fairfax County Planning Commission approved the proposed facility’s compatibility with its new location and with the county’s Comprehensive Plan. It also recommended approval of the required, special-exception permit when the matter goes to the Board of Supervisors on Oct. 15.

First, though, the issue went before a joint meeting of the Sully District Council and West Fairfax County Citizens Assn. (WFCCA) Land-Use Committee. There, details about the proposal were revealed.

“This facility will be for maintenance of our water-distribution network in western Fairfax County, and we’ve been working on this plan with county staff,” said

TRACY GOLDBERG with Fairfax Water. “In 2015, we began looking at our water-distribution needs, shortly after we acquired the City of Fairfax water system.”

She said Fairfax Water acquired the proposed Chantilly site in 2017. “The facility will have six vehicle-maintenance bays and outdoor pipe storage,” said Goldberg. “We’ve reached out to all the adjacent property owners and have heard no concerns from them.”

Steve Gleason, a planner with Gordon & Associates engineering firm, said it’s a 10.8-acre, wooded site zoned for industrial use. “Access and frontage are on Willard Road, near the Bowl America site,” he said. “There are three existing entrances, but we’ll just use two of them. There’s also about 60 feet of grade change on the site.”

The proposal shows 30 percent – 3.8 acres – of open space, which is twice what’s required. And the building would be nearly 70,000 square feet, with 65 spaces in front for staff parking, plus some visitor parking for contractors. There would also be parking for fleet vehicles – some of which would be under a canopy.

The building would be multipurpose, with a warehouse and loading dock, administrative offices and a vehicle-repair/maintenance area. Storage of materials such as sand, salt, mulch and gravel would be outdoors, as would be a fuel island and vehicle-washing area.

“There’s a sidewalk on one side and an 8-foot trail on the side closest to the Church of Jesus Christ of Latter-day Saints,” said Gleason. “The sidewalk would become a 10-foot-wide, asphalt, shared-use trail. There’ll be a secure, perimeter fence around the entire site, but a more aesthetically pleasing metal fence at the entrance on Willard. And there’s a 50-foot, undisturbed area and a buffer between us and the church. Regarding stormwater management, there’s an existing dry pond – and this, and other uses in that area, drain into it.”

Architect Greg Lukmire said the warehouse portion of the one-story building would be some 35,000 square feet. The rest of the space would be used for vehicle maintenance, shop storage and incidentals.

“The building would be in the middle of the site and is designed to be upscale and blend in with its surroundings,” he said. “It will be brick, with metal roofing, and landscaping in the front. And from the road and shared-use path, it would be set back and look like a brick building, so we think it’ll fit in quite well with the area.”

WFCCA’S Chris Terpak-Malm asked if the facility would be constructed in phases, but Lukmire said they’d prefer to do it all at once. Gleason said the site-plan process should take until summer 2020. And, added Lukmire, “We hope to start construction in 2021 and be completed in 2022. Construction cost is an estimated $32 million to $35 million.”

“To me, you need to add more trees,” said Terpak-Malm. “We’re having problems with erosion, and this runoff goes into Cub Run – which goes into the Occoquan – which is our drinking-water supply.” But Gleason said they believe the pond will be adequate to deal with it.

PANEL MEMBER Jay Johnston also suggested making the 65-space parking area a pervious surface, instead of impervious. “We’re committed to making this a LEED or equivalent project, so that’s one of our options,” replied Lukmire. “We’re also discussing having charging stations for electric vehicles.”

Terpak-Malm asked what their peak vehicle times are, and Lukmire said workdays there would be from 6 a.m.-3 p.m., but there would be vehicle trips throughout the day. Terpak-Malm then cautioned the proponents to “just be aware of the [nearby Westfield] high-school schedule.”

At-Large Planning Commissioner Jim Hart asked if they needed to put something underneath the piles of materials so wouldn’t leech into the water system. Gleason replied that “The water will be conveyed into a pipe and into a special, hydrodynamic separator that removes some of the pollutants before they reach the pond.”

Panel member Jeff Parnes asked if slow-moving traffic making a right turn from Stonecroft Boulevard onto Willard would have an adverse effect on traffic. Lukmire replied that county staff hasn’t asked for a turning lane there, but that, ultimately, that decision is up to VDOT.

Parnes then told the applicants that the land-use committees had no objections or concerns about the project. But, he added, “If county staff does, then we’ll ask you to come back again to address them.”