Hip-hop dancer can J-Walk without crossing the road. 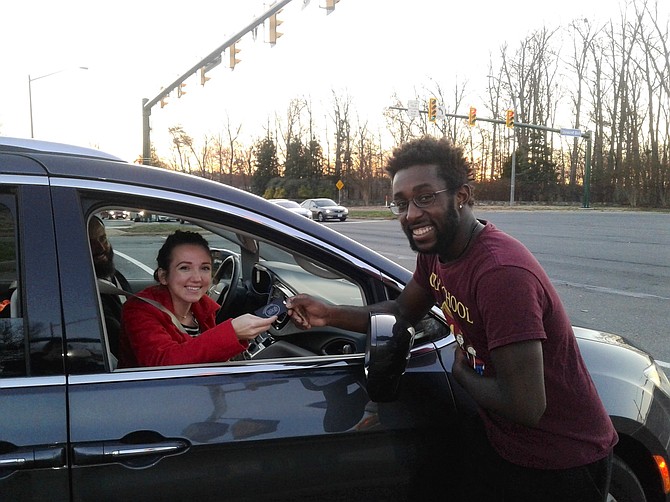 Stephanie Brewer, left, invites street performer Chris Conway to attend holiday services of the New Life Christian Church at 14550 Lee Road in Chantilly. Brewer and her family have seen Conway dance at traffic intersections in Centreville and Chantilly. “We see him all the time and the kids love it,” Brewer says Dec. 15. Photo by Marti Moore/The Connection

Centreville artist Chris Conway shows how a dance move called the “Benny Walk” is done Dec. 15 as the sun begins to set on a chilly Sunday in Chantilly at the intersection of Stonecroft and Westfields boulevards. 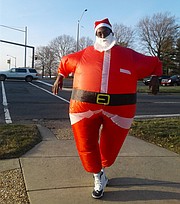 Chris Conway, 22, of Centreville makes good on a promise to his Instagram followers and dances to hip-hop, pop and dubstep beats in a festive holiday outfit Dec. 20.

Chris Conway of Centreville was born to dance.

The 22-year-old street performer proves it on any given day at various street intersections in Centreville and Chantilly. For nearly three years, he has lifted the spirits of motorists stuck in rush hour traffic.

Around 4 p.m. on a Sunday in mid-December, traffic is light but Conway still delights plenty of drivers who beep their horns, wave and shout hello. He returns the favor with a heartfelt smile and wave, while miming a robot at the traffic intersection of Stonecroft and Westfields boulevards.

Conway says he has danced all his life. Although he tried taking ballet classes for a month at age 16, Conway is self-taught and credits YouTube at his tutor. He aspires to be a choreographer and teach dance.

THE WORLD is Conway’s stage right now, and the street is where he practices his art.

Conway has confidence that if he hones his skills before hundreds of commuters every day — no matter how long — he will be noticed by the right people with the connections to help him succeed. Conway has nearly 300 followers on Instagram @thevadancingman plus more than 600 @positive_cj.

As the sun begins to set Dec. 15, Conway demonstrates a step called the “Benny Walk” from a song by King Imprint. Conway says it’s based on the popular hip-hop move known as the “Nea Nea” but describes the elements as more liquid and mixed with popping.

He also dances to an upbeat song called “Flamingo” by British indie pop band Kero Kero Bonito — the lyrics to which encourages listeners to love themselves the way they are, no matter how different they appear to others.

As her husband drives the family from Westone Plaza, Stephanie Brewer applauds Conway for the joy he brings motorists through his dance. She said her church minister met the street performer and told his congregation about Conway.

Brewer hands Conway a postcard inviting him to attend their annual holiday play — “Searching” — Dec. 22, and Christmas Eve services in the New Life Christian Church at 14550 Lee Road in Chantilly.

“We see him all the time and the kids love it,” Brewer says and believes Conway offers the community a little light of joy.

It’s not just her. A few minutes later, more than 18 cars stop and move through the traffic lights. A silver minivan and black SUV headed in opposite directions along Westfields Boulevard beep their horns and wave at Conway.

His next move doesn’t have a name yet but Conway learned it by watching a performance video of a competitive dance group called The Future Kingz. Based on the centuries-old art of pantomime, Conway pretends to walk down imaginary stairs while he dances and bobs his head downwards.

By adding it to other moves the dance team makes it fresh, Conway explains. A vehicle leaving Westone Plaza stops. The maroon SUV is packed with a girls’ basketball team and their mothers, who watch and cheer. One of the moms asks about Conway’s music player.

It’s called a “bumpboxx,” which is a boom box that uses Bluetooth technology Conway controls wirelessly from his smartphone without having to feed songs to the player from cassette tapes or compact discs.

“What’s a cassette,” one of the tweens asks her mother.

At the end of his Dec. 15 show, Conway’s cousin stops by. “It was embarrassing at first,” admitted Zachery Johnson, 22, of Centreville to see his relative dance in public. However, it makes him happy these days to see Conway make others happy through his performance art.

CONWAY tells his fans to follow him on Instagram. If he gets 30 more followers, Conway states, he will dress up as Santa Claus and “bust some moves” between Friday, Dec. 20 and Christmas Day. He had 207 followers @thevadancingman Dec. 15 and 255 followers Dec. 20.

He makes good on his promise Dec. 20 and walks to Stonecroft and Westfields boulevards on a Friday afternoon wearing an inflatable Santa Suit filled with cool air.

Conway waves to his captive audience of at least a hundred vehicles then dances to “traps” of old Christmas songs remixed with new beats. His fans include a group of young ladies, who roll down the windows of a white SUV to wave, beep the horn and scream for joy as they ride past Conway toward Sully Road. The occupants of two garbage trucks show their support, as well as the driver of an 18-wheeler.

Conway is stretching to the next level so he work full-time as an artist. Recently, he was booked to perform at a birthday party. He seeks an opportunity to teach people hip hop, pop and dubstep moves at a community center or other venue — like the new Balaxi entertainment center nearby at the Sully Shopping Center at 5111 Westfields Blvd.

Meanwhile, Conway demonstrates another move every street performer should master: The J-Walk.

“You move your feet in the shape of a J,” he shows on a small patch of sidewalk without crossing the street.