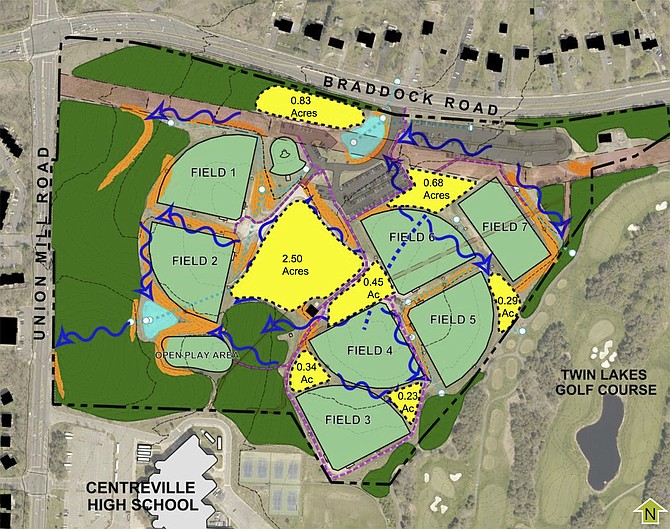 A map of the current uses at Braddock Park. The yellow areas are undeveloped.

The Park Authority is exploring what improvements are needed, so it recently held an online, public-information meeting. Supervisor Pat Herrity (R-Springfield) welcomed attendees, saying, “We want to hear your comments and thoughts about the park.”

The original goals of Braddock Park’s 1981 Master Plan were to incorporate both passive and active recreational opportunities, while preserving the site’s natural resources. Today, the park is primarily an athletic facility, and the Park Authority seeks to learn how well Braddock’s met the community’s needs and determine what improvements are needed for future users.

Park Authority Project Manager and senior landscape architect Doug Tipsword said this park was built between 1983-84. All seven of its fields are lit, as are the batting cages and the western parking lot. There are 345 parking spaces total, 13 which are ADA-compliant.

THE 1981 MASTER PLAN also contained a social plaza, tot lot, volleyball courts, an area for table games, plus trails for walking and running. But these elements were never built, and 5.32 acres of the park are still undeveloped. Mini golf and an open-play space were added in 1997, but the mini golf was removed in 2018.

So Tipsword interviewed people who use the park to find out what else they’d like to see there. “The most popular items were trails, a playground, a dog park and a pickleball court,” he said.

Furthermore, he said, the Park Authority wants to know who’s using Braddock Park, for what purposes, where they live, when they come to this park, how they’re getting to it and how long it takes them.

COMMUNITY MEMBERS then asked questions. A resident named Bill said, “It would be great to upgrade those [existing] fields to synthetic turf for extended use.”

“But none of these things are funded, yet,” added Springfield District Park Authority Board member Mike Thompson. “There can be a time lag between the Master Plan approval and the funding approval.”

Afterward, written comments were accepted for 30 days and are now being reviewed. Park design concepts will then be developed and presented publicly in late January 2021, followed by a public meeting on the draft Master Plan in June 2021 and adoption by the Park Authority Board, the next month.