Four local teens have completed all the requirements to become Eagle Scouts. But what sets them apart from other Scouts is that they’re girls. And unlike Boy Scouts – who generally take four to six years to earn this rank – these girls did it in just two years.

“This is a huge deal for these girls,” said Christina’s mom, Jennifer Alvarez. “They’ve all been part of Scouting for years, be it as a sister attending Cub Scout events with their brothers or as participants in Girl Scouts, Scouts BSA or Venture Crew, They were founding members of their all-girl troops and have all served as senior patrol leaders, among other positions, besides holding several president/vice-president positions in their crews.”

Proud of all four new female Eagle Scouts, Alvarez said, “Because of these young ladies’ Scouting experiences, they’ve all improved their leadership and communication skills and lived by the Scout Oath and Scout Law.” 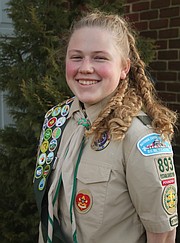 Megan Staton, 17, of Troop 893G, is a Westfields High senior and follows her dad and brother in achieving Eagle Scout. She has earned her Gold Award for Girl Scouts in 2020, completed her Order of the Arrow Ordeal Weekend and will soon achieve Venture Summit rank (the highest rank in Venturing). She also earned her Venture Ranger award, which exemplifies challenging, high-level, outdoor-adventure skills.

Staton earned two palms with her Eagle Rank (for a total of 31 merit badges) and has made treks to Philmont and Okpik Northern Tier High Adventure camps. She is currently president of the Council Venturing Officers’ Assn. for the National Capital Area Council. Her Eagle project was to refurbish Westfield’s lecture hall. She refreshed the walls, then painted Westfield-themed décor and created a gallery for graduating-class pictures. 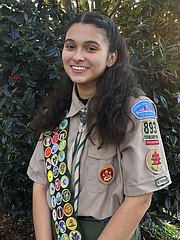 A Chantilly High junior, 16-year-old Christina Alvarez of Troop 893G is excited to join her great-grandfather, uncle, cousin and older brother as Eagle Scouts. She’s also a Juliette in Girl Scouts and will be finishing up her Silver Trefoil (100 service hours in defined categories) and Gold awards this year. Furthermore, Alvarez was Troop 893G’s first Senior Patrol Leader.

To date, she’s earned six palms in addition to her Eagle Rank (51 merit badges). With Venture Crew 893, she also plans to finish her Summit Rank this year and is working toward receiving the Ranger Award.

Alvarez has attended Okpik Northern Tier High Adventure winter camp and plans to attend Summit and Sea Base, over the next few years. Her Eagle Project was building insect hotels at the Izaak Walton League’s Arlington-Fairfax Chapter. 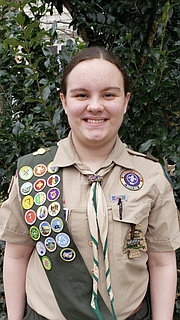 A senior at Centreville High, Elena Taylor, 17, is in Troop 893G and joins her great-grandfather and her twin brother as proud Eagle Scouts. When asked why she joined Scouts BSA, she explained, “My brother, Robert, was in the troop, I watched him come up through the BSA process and had gotten to tag along on many occasions. When I was old enough, I joined Venturing Crew 893, as there was a coed opportunity there.”

For her Eagle Project, Taylor worked with Ellanor C Lawrence Park to educate the community about invasive plant species and remove them. She led a team of 60 volunteers to clear 70,000 square feet of parkland. She’s also completed her Order of the Arrow Ordeal Weekend.

As a Venturing Scout, Taylor is working on her Summit Rank. She recently finished the requirements for the Ranger Award. And as a Girl Scout, she completed her Silver Award project where she assembled nearly 10,000 food packs to deliver to a local food bank. 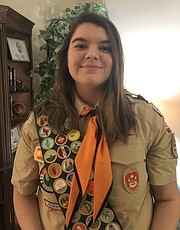 Bailey Ruhl, 17, of Troop 1137G, is a senior at Charles Colgan High and joins her brother in the Eagle Scout family. Indeed, her family has a long history in Scouting in the United Kingdom. Her great-grandfather camped with the founder of Scouting, Lord Robert Baden Powell, and her grandfather was the youngest Group Scout Leader in the U.K.

Ruhl has served on the staff at Camp Olmsted at the Goshen Scout Reservation in Southern Virginia. She’s currently earned four Eagle Palms (44 merit badges) and had the opportunity to complete her Order of the Arrow Ordeal in 2020.

Her Eagle Project was the installation of a commercial playground at Pillar Church in Woodlawn. The project took place over three weekends in November and took more than 430 hours of volunteer work to complete.

Although her time in the troop has only been two years, Ruhl believes that “Scouting is a journey that should not be rushed. It’s important to take the time to enjoy the moments along the path and watch the sunsets.”

Jennifer Alvarez contributed to this story