Bates Is Named Sully District’s Officer of the Quarter
Votes

Bates Is Named Sully District’s Officer of the Quarter

His “Experience, dedication and hard work” paid off on patrol. 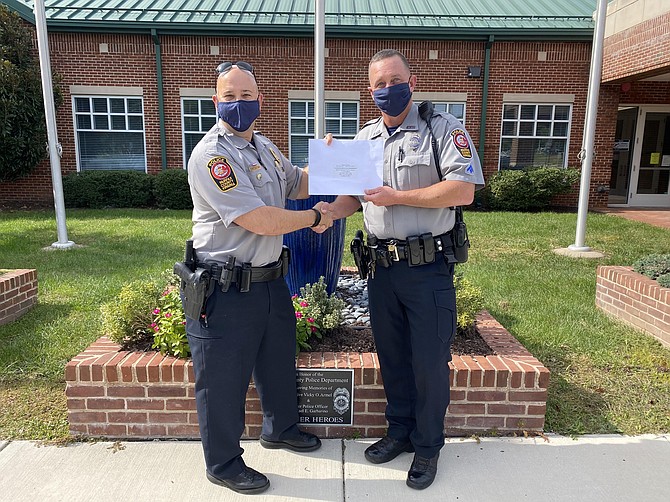 MPO Scott Bates has been named the Sully District Police Station’s Officer of the Quarter for the third quarter of 2020. Honored at a recent meeting of the station’s Citizens Advisory Committee, he’s a 25-year veteran of the Fairfax County Police Department.

Recommending him for the award, 2nd Lt. James Glassman explained why Bates is worthy of this honor. He began by noting that, after serving 20 years with the Motor Squad, the officer returned to patrol last April, when he joined the Sully Evenings A squad.

During his short time being back in patrol, wrote Glassman, “MPO Bates has made a positive impact on his new squad with his positive demeanor, drive to lead by example and desire to protect the Sully community.” He then detailed four instances during which Bates demonstrated his work ethic and dedication.

Bates then left Route 28 at the next exit and happened to find the motorcycle parked at a local restaurant. But as he approached, the motorcycle took off again. “Bates let other officers know the motorcycle fled and continued his relentless search,” wrote Glassman. “When he got to the next intersection, he instinctively turned right.

“By that point, the FCPD helicopter was overhead and informed him the motorcycle was in front of him on the next street. The motorcycle driver surrendered to Bates, and the driver was charged with reckless driving and speeding to elude.”

“He discovered through research that the suspect had several prescription-fraud arrests in the past,” wrote Glassman. “She later returned to pick up the prescription and Bates was there to meet her. She was dressed in a medical uniform attempting to portray herself as a medical professional.”

During his interview with her, said Glassman, “She ultimately admitted to the offense. She also had outstanding warrants from another jurisdiction, and it was learned that she was violating a child-custody order. After her arrest, officers were able to locate the child and return him safely to the other parent. She was charged with forging the prescription and taken into custody.”

Once Bates’ evening squad began its shift, a picture of the passenger was shared with the officers. “Bates drove to the area where she was last seen and, while driving around the area, he saw her cross the street in front of his cruiser,” wrote Glassman. “She spotted him and took off running. Bates radioed that he was in foot pursuit of the suspect and, after a short chase, she gave up. He then took her into custody on the outstanding warrant from Prince William County.”

For all these reasons, Glassman recommended Bates receive the Officer of the Quarter award. Overall, he wrote, “MPO Bates’ years of training, experience, dedication and hard work led him to make the Sully community safer with the arrest of a reckless driver, the prevention of a prescription fraud, two stolen-vehicle recoveries, and the arrest of two wanted subjects.”