‘Hilarious Comedy for the Entire Family’ 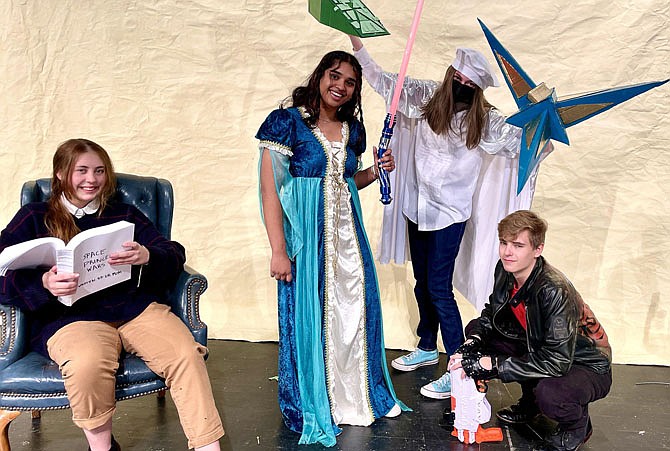 A mash-up of “Star Wars” and “The Princess Bride,” Chantilly High’s new children's show is “Space Princess Wars.” And it promises a good time for both children and adults.

“It’s purely written for laugh-out-loud entertainment for the entire family,” said Director Shannon Spicer. “I love it, not only as a director, but as a parent, since I grew up watching these two films as a kid. Younger children will love the show for the comedy and adventure, and their parents will get a bit of nostalgia along the way.”

It's the story of a mom reading a screenplay she’s written, to her daughter, Archer. In it, a young teen named Moon Starchild and an old man named Galdromius are in outer space and must journey across the galaxy to try to save Princess Amaria from three goons. On the way, they have to overcome threats and obstacles, including one from the dark queen, Mordra.

Sophomore Tyler Ellison plays Moon Starchild. “He’s energetic and ambitious and believes he has some greater destiny in the galaxy,” said Ellison. “He’s been sheltered from what’s happening there, since he’s lived his life on a farm. One day, Galdromius – who knows his uncle – comes to his house and asks him to help rescue the princess, and their adventure begins.”

Ellison likes his character’s energy; and “Because he’s so passionate, I can show a lot of his emotions,” he said. “Starchild is also in the middle of another story unfolding, so it’s interesting to see how he interacts with all these new characters coming into his life. Playing the lead is a lot of responsibility, but also fun, and I’m happy to have this opportunity.”

As for the show, Ellison said, “Lots of the humor is charming, and all the characters are likable because of their distinct personalities. The audience will also enjoy the fun and unique costumes, plus the makeshift-looking sets showing the world coming together in Archer’s eyes.”

Portraying Bo Blaster is sophomore Zack Smith. “He’s a Han Solo-esque, charming rogue and smuggler,” said Smith. “He lives on a spaceship, going from place to place, and taking jobs just for the money. He’s also witty, fearless, comical and sarcastic. He’s introverted, at first, but eventually becomes more open to other people.”

Smith said Blaster reminds him of himself because “He has a lot of my mannerisms and personality – the sarcasm, humor and wit. He keeps the audience on their toes because they don’t always know what he’s going to do next. And it’s fun playing him because of how his personality changes throughout the show.” Smith likes being in a children’s show because “It’s all over-the-top movements, big personalities and acting in smart, but unexpected, ways.”

He said children in the audience will like the play’s funny, slapstick humor. And, added Smith, “It’s told like a little kid’s story, so they get to use their imaginations. They’ll also like seeing the projections of different spaceships. And there’s definitely humor for adults, too.”

Freshman Anya Saffari plays Archer, who’s about 10. “She’s dramatic, expressive and stubborn,” said Saffari. “She likes to get her way and is pretty annoyed when she doesn’t. But she’s still a kind person and loving to her mom. And while her mom reads, she interrupts to ask questions and give her opinions.”

Enjoying her role, Saffari said, “Archer’s very funny; her lines bring a lot of humor to the show – especially when she tells her mom, ‘That’s wrong; you can’t do this,’ about the story she wrote. It’s fun acting really big and childlike because it reminds the actors of their own childhoods. And even though we’re older, we still laugh at the things kids would.”

She said audiences will love the play’s comedy. “I don’t think the mom intended her story to be funny,” said Saffari. “But because she has a low budget to produce it, people come onstage randomly, holding lightsabers and planets – and the kids will find this hilarious.”

The co-stage managers are students Anna Crowley and Rachel “Mini Crispy” Shear, and they discussed the set and props. “We’ll have some unique fight choreography,” said Crowley. “And because it’s set in space, the characters use lightsabers and blasters to fight with aliens, such as a variety of different-looking teddy bears.”

For the set, said Shear, “We’re repurposing the ‘Into the Woods’ set [which ends its run April 30]. For example, we’ll use its runway extension for a spaceship or a path.” Crowley added that its high platforms will become Archer’s bedroom.

“One of the gags is that the show’s on a tight budget, so a person will make all the sound effects with his voice,” said Shear. “And the actors will walk cardboard spaceships across the stage.”

“The planets are made of foam,” noted Crowley. “And the actors will glide on hoverboards and Rollerblades to portray the planets.”

Director Spicer double cast the show to give more students the opportunity to perform, so there’s a cast and crew of about 50 total. “The actors have really picked up on the comedic moments and learned to master all the physical comedy,” she said. “And our costume head, freshman Zander Hall, came up with a great homage to ‘Star Wars’ and ‘The Princess Bride,’ while ensuring the colors are bright and lively and will appeal to young families.”

And under props master Sam Cole, said Spicer, the students constructed spaceships, planets and special-effects props that “really add to the visual storytelling element because they’re so colorful and engaging. Most of all, this show is very funny – and we could all use some laughs.”