‘He Is, without a Doubt, a Community Caretaker’ in Centreville
Votes

‘He Is, without a Doubt, a Community Caretaker’ in Centreville

Lephart honored as Sully’s Officer of the Quarter.

MPO Russ Lephart was selected as the Sully District Police Station’s Officer of the Quarter for the third quarter of 2021. He was honored at a recent meeting of the station’s Citizens Advisory Committee. 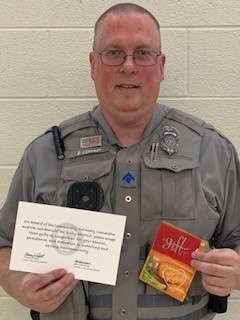 While presenting him with the award, Lt. John Lieb, the station’s assistant commander, said Lephart “responded to several, dangerous, rapidly evolving situations that he managed to de-escalate.” Nominating Lephart for this honor, 2nd Lt. Richard Lehr wrote that the officer had an “exemplary second quarter in 2021.”

“He also mentioned his thoughts of selling all his belongings, purchasing a rifle, and shooting them out of the sky,” continued Lehr. “During the interaction, he would go from calm to irate, when no one could see what he was seeing in the sky.

[So] Lephart and assisting officers formulated a plan – since a firearm was still outstanding and its location was unknown.”

Police approached the person and informed him that they were placing him in custody under an Emergency Custody Order (ECO) and that he was going to receive services at the Merrifield Center. He then became irate and actively resisted when the officers tried to take him into custody. Once he was handcuffed, a search yielded the outstanding firearm in his front waistband.

Lephart transported him to Merrifield, where a Temporary Detention Order was issued. Taking an extra step, Lephart also obtained an Emergency Substantial Risk Order and was able to take possession of the firearm. The court later issued a 180-day Substantial Risk Order. And, wrote Lehr, “Lephart’s calm temperament and demeanor during this encounter was [even] noted by the assistant commonwealth’s attorney.”

During June 2021, a family was sleeping when it was awakened by someone banging on the front door. The person then walked down the porch and broke out a front window, trying to enter the home. When the resident opened the front door, the intruder forced his way into the home, assaulting the resident.

The two struggled, and the resident was able to get the man out of the home and onto the front lawn, where they wrestled. The intruder was holding the resident on the ground when Lephart arrived in the area. Hearing the victim yell out to him, Lephart immediately rushed to his aid.

“The sole officer on the scene, Lephart took control of the [intruder] and informed him that he was under arrest,” wrote Lehr. “When Lephart was handcuffing him, he pulled away, stood up and struck Lephart and took an aggressive stance. Seeing that Lephart needed assistance, the resident returned to help [him] in controlling the man.”

Lephart was able to handcuff the assailant without further incident and provide the necessary services he required. According to Lehr, investigation revealed that the man had tried to break into several homes and had damaged various properties just prior to Lephart’s arrival.

Then on July 24, 2021, Lephart responded to a disorderly conduct call at the intersection of Route 29 and Old Centreville Road in Centreville. There, someone was yelling and smashing the front windshield of a vehicle. Lephart was the first officer to arrive and, from the information provided, he immediately identified the individual involved standing in the middle of the road.

“Lephart engaged the community member, who appeared to be under the influence of an unknown substance,” wrote Lehr. “As Lephart was talking to this person, he bolted across the road toward the vehicle whose windshield he had just busted.”

But Lephart and assisting officers were able to apprehend him and guide him to the cruiser to prevent him from walking in the road. However, when they tried placing handcuffs on him, he collapsed on his own and laid on the pavement, continuing to be belligerent and actively resisting arrest.

“During this time, the community member removed handcuffs from Lephart’s duty belt, but they were quickly retrieved,” wrote Lehr. “And twice, he attempted to remove the duty pistol from Lephart’s holster, without success. He was eventually taken into custody and provided services. The [residents] observing this incident noted the professionalism of Lephart and the officers involved.”

Lehr concluded by saying, “These events document fragments of Lephart’s work and his positive attitude. But he is, without a doubt, a community caretaker – and his commanders, supervisors and Fairfax County community members have all benefited from the fruits of his labor. For these reasons, MPO Russ Lephart is Sully District Station’s Officer of the Third Quarter of 2021.”