‘We’re Down about 140-plus Officers’
Votes 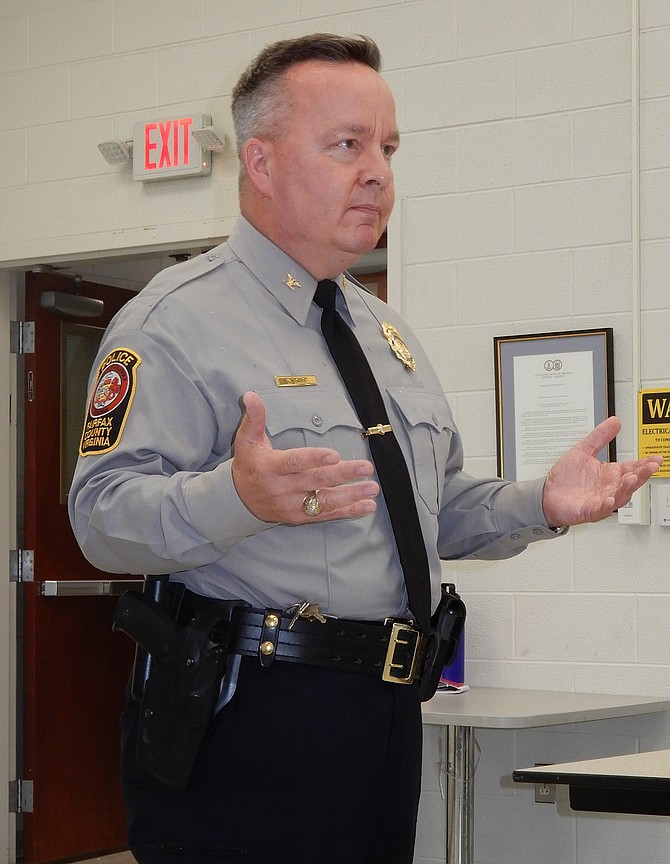 “This is my fourth police department, and this one is the gold standard,” he said. “What yours has is its world-class, peer-support system focusing on the health and wellness of your police officers.”

Describing this department as “big, busy and professional,” Davis said it’s the largest in the commonwealth and 32nd largest in the nation. You can eventually do anything you want to do in our department because we’re big and busy enough for officers to explore a variety of opportunities, such as K-9, detective, patrol, etc.”

He said the current vacancy rate is just under 10 percent. “We’re down about 140-plus police officers – the largest vacancy we’ve ever had, despite enhanced recruiting efforts. We’re trying to be innovative in how we’re attracting them and to become more diverse by race and gender.”

According to Davis, the county’s last police academy graduating class was 33 percent female – the “largest number of women, ever.” And over the last couple years, he said, “Racial diversity in our academy classes has been double the amount of that of our incumbent police officers.”

However, he added, “At the same time as we’re trying to hire more officers, there have also been significant numbers of retirements in the Police Department by those who joined around 1995. It takes about seven years for the average police officer to get really good at their craft. And once they do, we want to keep them.”

As for crime, Davis said this year’s challenges include automobile thefts and drug use. “We still have the lowest rate of auto thefts among the nearby jurisdictions, but it’s rising,” he said. “So we’re creating an Auto Thefts Enforcement Team to investigate stolen cars.”

Another problem is the theft of catalytic converters from vehicles “because of the valuable, precious metals inside them,” he said. “So we now have a full-time Catalytic Converter Unit working on these thefts.”

Davis noted, as well, that the Opioid Overdose Squad is busy investigating fatal and nonfatal drug overdoses. “Now, we’re dealing with pills laced with fentanyl,” he said. “And the biggest spike in the past year has been with high-school students. We recently obtained a 22-year [prison] sentence for a drug dealer who sold drugs that resulted in a fatal overdose.”

He also answered questions from those attending the in-person meeting. Saying “I don’t go into a Walgreens or pass a school without thinking about mass shootings,” John Greenhaugh asked Davis how all the mass shootings throughout the country have affected the training of Fairfax County’s police officers.

“We’ve been training for years for active-violence incidents, and we have strong training,” replied Davis. “The delays and lack of action you saw in Uvalde, Texas, wouldn’t happen here.”

Also answering that question was Capt. Rachel Levy, commander of the Sully District Station. “I can assure you that, after what happened in Texas, we will not hesitate to go in,” she said. “Even if the chief says no; rank does not matter – life is the priority – we’re going in.”

Robert Muskett asked why police SROs (school resource officers) are at the county’s middle and high schools, but not at its elementary schools. Levy told him it was “a line item that had to be cut from the budget, years ago. In October, I’ll meet with all the principals, including the elementary-school ones. We’ll be having conversations about what they can do if they don’t have an SRO at their school.”

Davis said the department puts “top-notch police officers” in the schools as SROs.

Muskett said, “To the students, it’s those daily interactions with the man behind the badge that are important.”

Next, John Werderman told Davis, “Over the 13 months you’ve been with us, I notice more technology being used, and I like that.”

“A company called Axon that makes dash and body cameras recently bought a company called My90,” said Davis. “And now, many calls for services will generate a five-question survey back to the person who called, regarding how their interaction with the police was. We’ve just started using it, and we’ve already received 800 responses back in the past few weeks.”

Cholley Moses asked, “Are your officers trained to recognize mental illness, as opposed to someone just acting out?”

“Yes,” replied Davis. “We have crisis-intervention training, and it requires ongoing education. About 42 percent of our agency is trained in it. We’d like to have co-responder mobile-crisis units – a police officer and a mental-health professional in the same car – but we need to get the mental-health/behavioral-crisis counselors to be part of it. But it’s the wave of the future in public safety.”

Levy said the new police academy recruits are getting this additional training and “It’s certainly paying dividends. We’re also starting a new program, ABLE – Active Bystander Law Enforcement.” Referring to George Floyd’s 2020 death at the hands of Minneapolis police, she said ABLE involves “scenario training, requiring police officers to intervene when one officer sees another officer doing something harmful to another human being.”

As the meeting ended, MPO Sabrina Ruck, the station’s crime prevention officer, encouraged local communities to participate in this year’s National Night Out celebrations. These outdoor events enable firefighters and police officers to come together and mingle with residents at cookouts, pool parties and ice-cream socials, so residents may get to know and interact with them in relaxed, informal settings. This year’s National Night out is slated for Tuesday, Aug. 2.