KCPC: ‘Important Part of Our Community’ in Centreville
Votes

KCPC: ‘Important Part of Our Community’ in Centreville 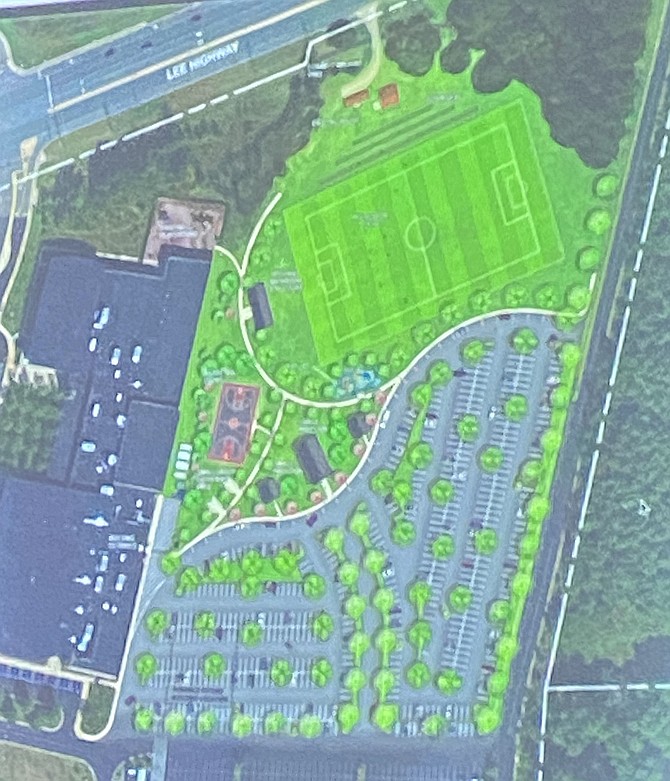 Diagram showing the location of the planned athletic field on the church property and its proximity to Route 29.

With the blessing of the Fairfax County Board of Supervisors, Korean Central Presbyterian Church (KCPC) will be able to add more uses to its property in Centreville. The church building itself will not be changed; but the grounds will gain places for recreation and socializing.

Along Route 29 in Centreville, the church site contains some 84 acres; however, KCPC now owns 5.73 more acres than it did originally. So it asked the Supervisors to approve a special-exception application so it could incorporate the additional land into its property. But that’s not all.

“The applicant proposes to add outdoor recreation on [this] parcel, which would include a multipurpose athletic field, basketball court, playground and pavilion areas,” said Sharon Williams of the county’s Department of Planning and Development. She was addressing Board members during their Nov. 1 public hearing on this matter.

Explaining the proposal’s details, she said KCPC also plans to replace its existing,\ gravel parking lot with one having an asphalt surface. It would be south of the new athletic field and would provide the church with an extra 526 parking spaces.

“In addition, the applicant proposes to allow the existing, private school to expand the age range of the children [attending it] from the current operation of kindergarten through second grade to kindergarten through sixth grade,” said Williams. She noted that no change in the number of students is anticipated.

She said the church also potentially plans to someday construct a new, 20,000-square-foot administrative building on the western side of the parking lot. It further proposes renovating and expanding the existing 810-square-foot single-family, detached home on the added property. When completed, it would be 1,200 square feet and would function as the church rectory.

No changes are planned for the rest of the site, said Williams. “The southern half of the property is proposed to remain undisturbed,” she said. “It would continue to contain a sanctuary and a chapel, a private school and a child-care center.”

The site will also maintain 55-percent, undisturbed open space. The additions will be the 81,000-square-foot multiuse, natural-grass athletic field, as well as a 6,572-square-foot basketball court and a 3,465-square-foot tot lot. “The field would not be lit,” said Williams. “And the proposed facilities would be private – for use by the church congregation, with limited use by the general public in the neighboring community, and by appointment only.”

No recreational league play would be allowed on these facilities. And the two pavilion areas, plus a small bathroom, will be built south of the field and used by KCPC for outdoor events and fellowship.

Also speaking to the Supervisors was attorney David Houston, representing the church. He said adding both the active and passive recreation uses on the property, plus the extra parking, will provide the members with more opportunities for “fellowship and engagement.”

On Sundays, about 5,000 people attend KCPC’s five different services, but the current grass overflow-parking field to the right of the sanctuary can’t be used in bad weather, so the new, permanent parking spaces will be especially beneficial. And some impervious surface, plus permeable pavers, will be added to that grass lot.

That way, church members will be able to park on it, instead of having to take a shuttle to park at nearby Bull Run Elementary. Furthermore, these additional spaces, plus the pavilions, will enable the congregation members to stay longer and mingle with each other after their particular service is over – instead of having to quickly drive away so people arriving to attend the following service would have places to park.

Houston also said some stormwater-management upgrades would be done to the site as part of the work. And he stressed that KCPC’s proposal had received favorable recommendations from the Sully District Council and county staff, as well as the unanimous approval of the county Planning Commission.

Supervisor Kathy Smith (D-Sully) then made a motion that the Supervisors approve the church’s special-exception amendment and thanked KCPC for all its work with the staff. “It was really important that we preserve the open space,” she said. “Anybody that’s been to that site knows that we need more parking [there]. So I’m happy that was able to be worked out with the permeable pavers; and the recreational facilities will be good.”

Board of Supervisors Chairman Jeff McKay also thanked the church for “being such an important part of our community.” The Supervisors then voted and approved the plan unanimously.